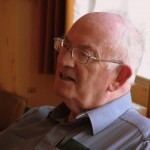 I was born in Thurles in October 1935 in the old St. Mary`s Hospital. As was common practice then I was baptised at 2 days old in the Cathedral of the Assumption, Thurles. I was raised in a rural community in the parish of Drombane about 8 miles from the town of Thurles. I attended a National School in Newtown, Drombane parish. When I concluded my primary education I attended Thurles CBS. Back in those days there was no free transport so we travelled on bicycles in all weathers.

Many boys and girls at that time and for years afterwards entered convents and Junior Seminaries at a young age. I joined the Society of the Catholic Apostolate (Pallottine Fathers) as a postulant in 1950. We used to go  to the CBS Secondary for our daily classes. Fortunately I enjoyed sports and I played hurling and gaelic football with various teams. I was lucky to win Dr. Harty Cup, Dean Ryan Cup, Croke Cup and Rice Cup finals with the famous school. Tipperary had great minor hurling teams in those days. They won the All Ireland hurling finals in 1952, `53, `55, `56 and `57. They were beaten in the 1954 final. I was lucky to win All Ireland medals in 1953 and 1954.

Our novitiate was in Cabra – about two miles outside Thurles in those years. I entered the Novitiate in September 1953. Fr. Tom Phelan, who was a avid Tipperary supported allowed me to leave the novitiate and head for the big city of Dublin and play against Dublin in the All Ireland final.  Having completed the novitiate I transferred to our college in Thurles and from there I attended daily lectures in the local St. Patrick`s College. This is no longer a seminary; it is now the equivalent of a university.

After finishing 1st. philosophy and spending a couple of days on retreat in Mt. St. Joseph`s Monastery, Roscrea I made the decision that the priesthood was not for me. People in Ireland were fairly poor at that time and jobs were scarce. There was great emigration in the 1940`s, `50`s and 60`s to Britain and the US. I obtained temporary employment in Thurles Sugar Factory and later on with the ESB.

When I left the seminary I made a decision to never enter any seminary again. I had cousins home from London on holidays and they assured me that they would find employment for me in the big city of London. I worked in an office for a Kerry man – J. Murphy and Sons – and the pay was £7 each week. In those far away days you could get an excellent meal for 5 shillings in the old money. I kept up the hurling and I played for a team in Kilburn, West London. There was no trouble carrying a hurley on London transport at that time.  I bet it might be considered a dangerous weapon now.  I moved from Murphy`s to work for a subsidiary of ICI.

During my time in London I became very active in the Legion of Mary. Initially I was a member of a parish praesidium. The parish was between two prisons, Holloway and Pentonville.  I joined the men`s prison presidium in the parish and I became an official prison visitor to Pentonville Men`s Prison. I became the treasurer and later the president of Islington  Curia and at that time there were 23 praesidia in the curia. I lived a very full social life and at that time there many Irish dance halls throughout London and I learned to dance with the best of them, although I would have to confess that I was no Fred Astaire.  I dated a girl, who was a native of Bruree and after a couple of years we became engaged to be married.  Back in those days couples didn`t live together unless they were married to each other. Sometime in 1960 we decided that we would emigrate to America.  I would go first and later on she would follow me.  I was sponsored by my sister and brother in law in Syracuse, New York State. I obtained employment in a bank – working as a cashier.  My job description then could never lead me to be a part of the ongoing chaos in banking.

The wall in Berlin was built in June 1961 and America was afraid of a war starting between themselves and Russia. I was called to register for draft, although I wasn`t a US citizen. I was classified 1A and I was given the choice to join the army or leave the country. I had hoped to work at banking in the military but Providence led me to qualify to be a Chaplain`s Assistant.  When I was fully trained I was assigned to the Post Chapel at Fort Sam Houston, San Antonia, Texas.

One day I said to myself, “I was once in God`s Army and here I am now stuck in Man`s Army”.  Although I was still engaged to be married I began to think about entering a seminary again, but not the Pallottines. I was living in the US and I considered entering some Religious Order over there, but I couldn`t decide which one.  The Catholic Chaplain encouraged me to enter a seminary. I had an uncle at that time, who was a priest in San Diego Diocese and he asked me to join his diocese. I said “no”; I wanted to join some Religious Order.

I still could not make up my mind.  I went to have breakfast on the Broadway, San Antonia with my army chaplain boss and another soldier.  On the way in I purchased a daily paper and going through the pages I found myself transfixed looking at a picture of Blessed Vincent Pallotti, who was about to be canonised at that time in Rome. This was in January 1963. My mind was made up as I felt Jesus; the great High Priest was directing me back to my first love as a future Pallottine.

I applied for readmission and I was accepted. I entered the Pallottines for the second time in September 1963. Of course I had to break off my engagement to a wonderful Irish Catholic girl. In time she married a former English seminarian and I often visited them in their home in Ealing parish, London.  They have 3 sons and over the years 2 of them played rugby with London Irish.