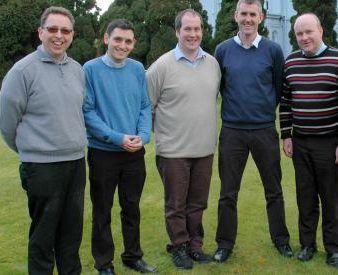 2016 was a year of celebration for the Pallottine Fathers and Brothers in Ireland. Two of their six students, Charles Lafferty from Co. Derry and Liam O’Donovan from Co. Kilkenny, will be ordained deacons in June and two more, Rev. Brendan McCarrick from Co. Sligo and Rev. Jaimie Twohig from Co. Cork will be ordained priests in July.

“It is a really positive year and there is great elation,” says Fr Emmet O’Hara, vocations director. “I think students attract students, because they see there is life and hope here.”

“It is a great excitement for me and the community, but also for my family and my parish at home,” says Brendan (39).

He began a discernment process for the priesthood back in the 1990s but realised “it wasn’t for me” and worked for a number of years in a concrete manufacturing company. However, the call to a vocation never completely left him and he says it was a desire for community life that drew him to the Pallottines.

“I travelled to World Youth Day with them in 2008 and on that trip I decided that I would like to try and return to religious life, and I was warmly received to journey with Fr Emmet and the Pallottines.”

Living in community has also been an important part of the vocation journey for Jaimie (27).

“I always liked the idea of the support and friendship of community life,” he says. “There is a great bond between all the students and with the other ordained priests and the brothers in the community. They helped us as friends and showed us what community is about. It’s like a family in many ways. It’s not always easy, there are challenges, but I am happier than I have ever felt before.”

Jaimie says he was a typical teenager and faith wasn’t very important to him growing up, but this all changed when he went to Medjugorje at the age of 16.

“The experience over there was life changing. I really found my faith,” he says. “When I left school I worked for three years for a pipe company but this thought of the priesthood was always there. No matter how much I tried to convince myself it was never going to happen, it never went away. So I thought I had to do something about it,” he explains.

“I was discerning for a while and I came across the Pallottines. I started journeying with Emmet and I remember there was one vocations weekend in particular in Thurles and I just knew that this was the right place for me. I felt a great peace and I knew the Lord was calling me there.”

The Pallottines were founded in Rome in the 19th Century by St Vincent Pallotti, who had a desire to revive faith and rekindle charity. “He saw a crisis of faith in his own time,” says Fr Emmet. “Today we are in Rome, Ireland, England, East Africa and North and South America. In Ireland we have a Student House and Provincial House in Dundrum, Dublin and a Retreat Centre in Thurles, Co. Tipperary. We also have two parishes in Dublin, one in Corduff, Blanchardstown and one in Shankill.”

John Regan (40), from Co. Mayo, is in his fifth year as a student with the Pallottines and he believes that he would not have entered religious life if he had not been invited on retreat by a Pallottine Father he met in Medjugorje.

“I had a fairly comfortable life, but there was a yearning inside myself and I wasn’t really happy,” he says. “It is important that you have somebody like a vocations director who will ask have you ever thought about a vocation. You have to ask people, encourage them and keep in touch with them,” he says.

Brendan thinks that prayer has a vital role to play in encouraging vocations. His small home parish began an initiative to regularly pray for vocations and now three men from the area are on the road to priesthood.

“I think silence and quietness of heart is also really important in discernment,” Jaimie says. “It’s not that the Lord isn’t calling, but it is so hard to hear in the culture we are living in where there is so much noise and distraction that we don’t listen to our hearts.”

All the students agree that while joining the priesthood may seem like a counter-cultural decision in today’s society, they have received nothing but positive support and encouragement from friends, family and former work colleagues.

“If you are listening to the secular world it will tell you this is very counter-cultural, but the support I have received from so many people was really encouraging. I didn’t think I would get that support,” John says.

Fr Emmet’s advice for anyone out there who is thinking about a vocation to the priesthood or religious life is “don’t be afraid”. “Make that step, get in touch with a vocations director and see where the Holy Spirit might be calling you to. Have the courage to check it out and see where it goes,” he says.