Friday September 12 is the day in which we, as a Province, celebrate the feast of Mary, Mother of Divine Love. On that day the students in Ireland will renew their Pallottine consecration and the novice, John Regan, a native of Westport, Co. Mayo, will make his first Pallottine Consecration. The professions will be made at the final Mass of the retreat.

Up-date on formation in East Africa

Three students will make Perpetual Consecration as Pallottines and members of the Province, all three are Ugandan and will be the first perpetually consecrated members of the Society from Uganda; they are Allan Bukenya, Simon Sserufambi and Ronald Kyomya. The Mass for the Perpetual Consecration will take place in Gallapo on Monday September 8. All three will spend their Pastorl Year in parishes – Allan in Siuyu Tanzania, Ronald in Dagoretti Corner Nairobi, Kenya and Simon in Esso Arusha, Tanzania 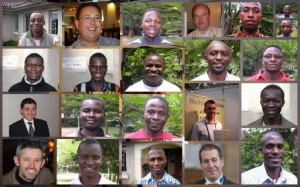 The two novices who are completing the canonical novitiate year in Butare, Rwanda, David Kakinda and Stephen Muli, are due to make First Consecration in Ngong Road, Nairobi, also on Friday September 12.

There will be two members of the Province doing the canonical novitiate year in Butare in 2014-2015; they are Marcellus Okoth Ochola, from Kenya,  and Joseph Kyobe, from Uganda. They are already in Rwanda since early June in order to have intensive classes in French to allow them participate fully in the novitiate programme.

The formation house for the Philosophy students in Njiro, Arusha is a hive of activity at the moment.  The Santa Maria Province in Brazil has had a mission in Mozambique since 1999. The first Mozambican professed students are studying theology in Santa Maria and a decision was taken last year in consultation with our Province to send the philosophy students from Mozambique to our Philosophy house of studies in Arusha. Seven Mozambican students arrived in Arusha at the beginning of June in order to have the opportunity to take intensive English classes before beginning their academic studies at the Spiritan Philosophicum. The students are accompanied by a Brazilian formator, Fr Paulo Jair dos Santos. Paulo did the one year course in Pallottine formation in Rome a few years ago, he did it the same year that Innocent Chami, the Rector in Arusha was on the course.

There are 12 students for our own Province studying in Arusha this year, six (6) in 3rd year, one (1) in 2nd year and  the five postulants who completed the postulancy period in Gallapo with Emmanuel Malley, were all promoted and will be in 1st year.

Fr George Damball will conduct the annual retreat for the entire student community in Arusha; the retreat will be from Monday August 4 to Friday 8.