Fr. TJ Moloney SAC (1946-2014) of the Pallottine Community in Wyandotte, Michigan, USA died suddenly today. He is originally from Ina, Co. Clare and, since his ordination in 1973, has served in Tanzania and the USA. May he rest in Peace. We offer our sympathy and prayers to his Mother Delia and family, his community and his many friends. Amen. 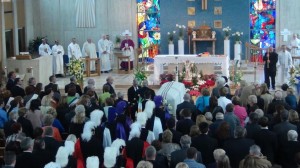 My name is Phil O’Dwyer and my relationship with TJ goes back to the 7th Grade in Thurles CBS. We arrived in that classroom on the day after the All Ireland hurling Final of 1960. There was this new kid in the class from Co Clare, he was bigger than we were and so our question was could he play hurling, or Gaelic football. We soon discovered he could play both and he was just the kind of guy we needed to beef up the defense….and so began a friendship that extended for 54 years.

We come today to celebrate his life, to remember his uniqueness and to honor his impact on those whom he touched as well as those that sought to touch him. We come with heavy heart, with many questions and few complete answers. The sudden nature of his passing challenges our unconscious view that TJ had a kind of permanent presence that would transcend time. Yet, we now assemble in the name of the God who made us and to whom we all must return.

After grade school we navigated our way through High School despite acquiring great familiarity with the Principals Office. Next came College where TJ single handedly caused the addition of a new rule: “ all students must return 2 days before classes begin in every semester.” This was introduced because TJ was never back in time and we all had to suffer because of his tardiness. His explanation was: “well if you lived in Clare you would understand how hard it to leave the banner county.” Needless to say we were not amused! Finally, at the end of college, Ordination Day came on June 9th, 1973. Some twenty five years later TJ asked me to give the talk at his Jubilee Mass in Inagh. He gave me the following instruction: “you have known me for 40 years, so for God’s sake don’t get into anything you can’t get out of.” I am following that instruction today as well!

TJ was a big man with a big heart. He provided strength in time of trouble; wisdom in time of uncertainty; and sharing in time of happiness. He liked to quote poetry and one of his favorites was: “Some men see things that are and say why; but I dream dreams of things that never were and say why not”

TJ had a mind of his own and ‘called ‘em as he saw ‘em.’ Simple compliance with convention was not his style; he easily broke with tradition when he saw human need. TJ was a good and decent man with boundless energy, enormous compassion and a burning desire to serve. The other side of that coin was equally true….he could be infuriating at times as well. Ach sinn sceal eile!

Beyond his Priesthood, TJ was a historian and a recognized expert on Irish music. He published a highly acclaimed history of the contribution of his parish to the universal church. The research alone for that book was extensive.

His expertise with Irish music was both a blessing and a curse. If you ever travelled with him in the car, an unending supply of loud Irish music was your entertainment. It was only interrupted when he would his fast forward to share with you what he would call a better tune. TJ’s passion for Ceili music obscured the possibility that others may not have a similar appreciation for it.

TJ believed in the dignity and equality of all human beings. He understood the Fatherhood of God as well as the brotherhood of mankind. He accorded the poor and the powerful with equal measure. If he couldn’t help either one he knew someone who could.

At this time of sorrow and burden for us here in America, TJ’s broken hearted mother, Delia, and his two brothers Mike and Pat, and two sisters Maureen and Margaret await the arrival of his remains at Shannon Airport.

I would like to share a little poem that might describe what TJ would want you to know today:
It’s called “The Next Place that I go” and as you know TJ never stayed long anyplace…..hewas always on the go:
The next place that I go Won’t really be a place at all.
There won’t be any seasons —
Winter, summer, spring or fall —
Nor a Monday, Nor a Friday,
Nor December, Nor July.
And the seconds will be standing still. . .
While hours hurry by.
I will not be a boy or girl,
A woman or man.
I’ll simply be just, simply, me.
No worse or better than.
My skin will not be dark or light.
I won’t be fat or tall.
The body I once lived in
Won’t be part of me at all.
I will finally be perfect.
I will be without a flaw.
I will never make one more mistake,
Or break the smallest law.
And the me that was impatient,
Or was angry, or unkind,
Will simply be a memory.
The me I left behind.
I will travel empty-handed.
There is not a single thing
I have collected in my life
That I would ever want to bring
…. Except. . .
The love of those who loved me,
And the warmth of those who cared.
The happiness and memories
And magic that we shared.
Though I will know the joy of solitude. . ..
I’ll never be alone. I’ll be embraced
By all the family and friends I’ve ever known.
Although I might not see their faces,
All our hearts will beat as one,
And the circle of our spirits
Will shine brighter than the sun.
I will cherish all the friendship I was fortunate to find,
All love and all the laughter in the place I leave behind.
All these good things will go with me.
They will make my spirit glow.
And that light will shine forever In the next place that I go.

Now TJ, 54 years have passed since 7th grade in Thurles CBS and we send you home to the green and misty land of your birth, may the gentle soil of the Banner embrace you in eternal rest. Ar dheis De go raibh a anam dilis. 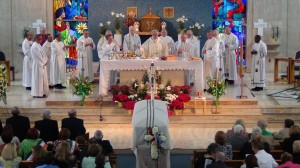 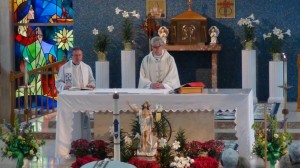 Transfer of his remains to Ireland.

Travelling from Newark to Shannon on May 7th at 19.30 on flight UA 025, arriving in Shannon on Thursday 8th at 7am.
Visiting will take place in the church in Inagh from 5 pm on Thursday then Service of the Word at 7.30.
Funeral Mass on Friday 9th in Inagh church at 11am. Burial in the local cemetery.

Hi to you all,
sad news from the delegature in the USA. Fr. T. J. Moloney died earlier today. T. J. was doing supply for his great friend Fr. Mike Cooney in Mount Clemens Parish, he was due to celebrate Mass at 8 am and when he did not appear somebody went to his room and found that he had died. RIP.
There are no details of funeral arrangements at this stage, the doctor and the coroner were at the presbytery and once that is done his body will be taken to Nixon’s Funeral Home in Wyandotte.
Please keep T. J.’s mother Delia and his brothers and sisters in your prayers.
God bless, Derry. [dt_divider/]

there are no funeral arrangements for T. J. yet. What has been organized is the funeral in Detroit.
His remains were released and are reposing at Nixon’s Funeral Home, Wyandotte. Viewing of his remains on Sunday May 4th at Nixon’s from 2 pm to 9 pm; there will be a Scripture and Prayer Service at 7 pm. Removal to St. Joseph’s Church, Wyandotte and lying in state on Monday 5th from 9 am. Concelebrated funeral Mass in St. Joseph’s at 11 am.
T. J. will be brought back to Ireland and the requiem Mass will take place in Inagh and he will be buried in the local cemetary,  as soon as I have definite news of when that will be I will let you know.

Day is done, but Love unfailing dwells ever here;
shadows fall, but hope prevailing, calms ev’ry fear. Loving Father, none forsaking, take our hearts, of love’s own making, watch our sleeping, guard out making, be always near !

Dark descends, but light unending shines through our night; you are with us, ever lending new strength to sight; one in love, your truth confessing, one in hope of heaven’s blessing, may we see, in love’s possessing, love’s endless light !

Eyes will close, but you, unsleeping, watch by our side; death may come; in Love’s safe keeping still we abide. God of love, all evil quelling, sin forgiving, fear dispelling, stay with us, our hearts indwelling, this eventide !