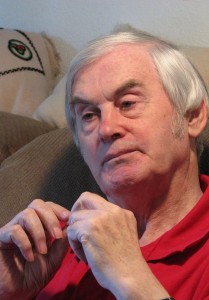 Greetings to you all from Dublin.

Fr John Joe O’Brien died peacefully yesterday Monday 8th January at 19.30 very peacefully. He was a resident in Woodlands Nursing Home, Dundrum, Co. Tipperary since May 2016. John Joe died very peacefully, his niece Josephine Carey-Corcoran and I were with him, I had anointed him and Josephine and I were praying the first decade of the Rosary when he died. May his gentle soul rest in peace.

John Joe was born on 14th of January 1935, made his First Consecration as a Pallottine on 12th September 1957, was ordained on 10th June 1962 and spent all of his ministry as a priest in the USA.

Fr John Joe will repose at Ryan’s Funeral Home, Silver Street, Nenagh, Co. Tipperary, on Thursday 11th of January from 4.30 to 7pm. His con-celebrated funeral Mass will take place in the College in Thurles on Friday 12th at 12 noon; burial afterwards in our Pallottine cemetary in Cabra.

“In God alone there is rest for my soul” Psalm 62.

Welcome to you all to our Community chapel, to our College, where Fr. John Joe started his journey towards priesthood on 8th September 1950, at 15 years of age, and where he lived until his ordination to the priesthood on 10th June 1962. He was ordained in the Cathedral of the Assumption here in Thurles along with his friend and class-mate, the late Fr. Michael McCormack, SAC. We are gathered here through our common Faith, and gathered in Christian Hope that Fr. John Joe is now in the eternal presence of the God he sought to know and love during his 82 years of life.

Our Mass is one of Thanksgiving, thanksgiving for Fr. John Joe, for his person, for his life as a priest and for all he was to all those with whom he shared life, be it family, his Pallottine community, parishioners and friends.

Fr. John Joe died very easily and peacefully on Monday evening at 19.30 in Woodlands Nursing Home. Josephine, his niece, and I, were present with him, I had anointed him a little earlier and we were praying the rosary when he died, and a phrase came into my mind then and stayed with me since, it is “and he breathed his last”, and it describes how he died, easily, there was no struggle, no agony, he went peacefully. And, of course, it later came to me that this is the phrase used to describe the death of Jesus in the Gospels of Saints Mark and Luke, in Luke 23, 46, “Jesus said ‘Father into your hands I commend my spirit’ and he breathed his last”, and this is how Fr. John Joe died, he breathed his last breath and he was gone, Josephine and I waited for another breath that never came.

Fr. John Joe to all those who knew him, was a man who sought God always and everywhere and found the God he sought. This is clear from the funeral liturgy he prepared for himself, which he did at least ten years ago. We were given a copy of these pages with the title “My Funeral – Liturgy of the Word” and “Music from Songs of Praise” for the hymns and the music; yes, prepared by him, typographical errors and all.

His well-worn and battered Bible has been placed on his coffin here before us; he read, and re-read the Word of God for as long as he was able and he chose 3 readings and a Psalm for his funeral mass that very clearly reveal his experience of God and they form a spiritual testament of his life.

Eternal life is to know God, now, and here on earth; the other two readings of the funeral liturgy develop this insight.

The second reading is from St. Paul’s Letter to the Ephesians, 3, 14-21, and here we have Paul’s prayer and it is that the graces of God working in one strengthen the inner self, the soul, the essence of the person, strengthening the inner person in a life-long pilgrimage in knowing the fullness of God. Paul uses imagery to best express this fullness of God – ‘to grasp the breadth and the length, the height and the depth of God, in knowing Jesus Christ who is the utter fullness of God’. This surely mirrors Fr. John Joe’s understanding.

The first reading is from Isaiah 43, 2-3, and I think it tells us how Fr. John Joe experienced the presence and strength of God in his life, the exhortation is “Do not be afraid, I have called you by name, you are mine, and should you pass through sea and fire, (which are really the struggles, difficulties and sufferings of life), be aware that ‘I am with you’”. This was, I think Fr. John Joe’s experience, that God was always with him, through it all.

We all know that his last ten years were difficult, the onset of Parkinson’s Disease and its advance with the diminishment that came with it, and in his case it was coupled with dementia which was the form the disease took in his life and it meant that his final years were not easy. Through it all he had his faith in God’s presence with him. I would visit him occasionally, and it became very hard to hear him and to grasp what he was saying, one day when I was with him he was very agitated and I started to pray with him and he joined in, and so I always prayed a little with him on each visit and he always responded by joining in with the well-known prayers. He never lost that ability to pray, even though so much else had gone.

One day during his early days in St. Theresa’s Nursing Home in Thurles he asked me if I had ever heard of and read Carlo Carretto, and coincidentally I had about 30 years earlier. Carlo Carretto was an Italian religious author and he wrote books on spirituality, Fr. John Joe had read his works and he spoke of the book “Letters from the Desert” on the spiritual life, on life with God, in prayer, in solitude and lived in reflection. Perhaps he liked Carretto because he too had spent so many years of his priesthood in arid places in Nevada and in north Texas and he identified with what he read of Carretto’s years of living in the North African desert as a member of the Little Brothers of the Gospel.

Fr. John Joseph was born on 14th January 1935, one of 14 children. He made his first Pallottine Profession on 12th of September 1957 and was ordained on 10th June 1962. In September 1962 he was appointed to Brownfield, Texas; in 1964 he was transferred to St. Elizabeth’s, Lubbock, and it is recorded that in the winter of 1965 and the spring of 1966 he accompanied 33 converts in their preparation for reception into the Catholic Church, so he was a very energetic young priest. One of our more colourful Pallottines, the late Fr. James McGrath, wrote of Fr. John Joe that he “is the most popular priest ever in St. Elizabeths”.

In 1966 he was moved to Ely, Nevada, where he started another work which was to be a characteristic of his ministry, that of building; in 1967 he was moved to Reno, Nevada, and in 1968 to Sparks, Nevada, where he was responsible for building an impressive C.C.D. centre with the help of his family, parishioners and friends, at a very modest cost. Fr. Pat Whelan was killed in a car accident on 17th of February 1973 and as a result of this Fr. John Joe was moved back to Texas to become pastor of St. Stephen Parish in Weatherford, where Fr. Whelan had been pastor. In Weatherford he was responsible for organizing and overseeing the building of the Holy Spirit Centre on Bethel Road, with a very large C.C.D. centre, a parish hall, and office space. In 1982 he was once again appointed to Sparks in Nevada and this time round he built a new rectory, church and parish centre.

In the year 2000 it became necessary to hand the parish in Sparks over to diocesan administration, but Fr. John Joe stayed on in Nevada and worked as a hospital chaplain until the onset of Parkinson’s necessitated a move and he went to San Francisco in 2007. On 2nd March 2012 he came back to Ireland and lived at St. Theresa’s Nursing Home, and in March 2016 he moved to Woodlands.

Fr. John Joe was a man who inspired loyal friendships which was evidenced by the letters, cards and greetings he continued to receive from so many loyal and faithful friends, long after he was able to respond to them. We received some lovely tributes to him, and perhaps a comical one or two, a parishioner from Weatherford wrote how Fr. JJ, as she referred to him, was an assiduous visitor to her home every Saturday at midday, to raid her fridge!

My confrere Fr. Donal McCarthy wrote a fitting summation of Fr. John Joe, and I will read it, “In life, John Joe was a man of quiet and gentle disposition. A man of great prayer, he was much sought after for guidance and direction in the spiritual life. He read and re-read the Bible every day and was steeped in the good things he found in it.”

And finally, from Psalm 62, our responsorial psalm today, which was chosen by Fr. John Joe, “In God alone there is rest for my soul”; Fr. John Joe, our prayer is that you find the rest you sought in your eternal life with God.