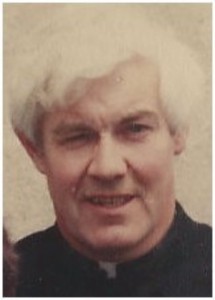 Listening to Sunday Miscellany on Radio I on Sunday I heard a reflection on autumn and falling leaves, a line from the reflection struck me: “the last solitary leaf on the bough of the tree will still whistle when moved by the wind.” This line stayed with me and came into my mind as I heard of Roger’s death on Monday morning.

Roger lived a good span of years, 77 in all, and like the leaf on the tree his life knew all the seasons of growth, maturity, decline and death; and Roger ‘whistled’ or made his presence felt all through the seasons, he was not a man whose presence went unnoticed.

We are people of faith, faith and belief in God, and cooperating with God and his presence in our lives and world is who we are. We celebrate with Mass Roger’s life, the life of a man, a priest, of faith.  Fr. Emmet spoke to us last night at the Reception of Roger’s remains into the chapel of Roger’s fidelity to the celebration of Mass right up to the end.

Our faith is illuminated and clarified by the Word of God, and the readings from Holy Scripture which were read in today’s Mass convey meaning to us on the reality of death.

The second reading is from the New Testament, from the First Letter of St. John, and was read by Roger’s nephew Rory; this reading states several simple truths very clearly and directly: we are God’s children; we are like God, we reflect some aspects of his nature; after death we will see God, as he is, and we will be like him, be transformed or perfected into God.

The Gospel reading which Fr. Joe Campion, a class-mate of Roger, proclaimed, is from the Gospel of St. John chapter 12. St. John writes of the fact that Jesus’s ‘hour’ had come, the time of his trial, rejection, death and resurrection and that he sensed and knew this, and in this context he said “unless the grain of wheat falls to the earth and dies, it remains alone, but if it dies, it produces much fruit.” This is a process which is in-built in the law of nature, in-built in the mystery of creation. Indeed we die, we die many times during the course of our lives, small deaths, and through each of these smaller deaths we become, sometimes wiser, sometimes more mature, more peaceful, more serene, more hopeful, or more faith-full. Jesus’ death and resurrection speak clearly and convincingly to us, they speak to us of life, through death, into eternal life.

In these past few days since Roger died we Pallottines have been talking of him among ourselves, telling stories of Roger, sharing memories or anecdotes from his life, things he said and did which stood out; there has been a good deal of laughter as we remembered him. We each of us will have particular memories of the man, the priest; we each saw and experienced different aspects of him. To return to the line about the ‘last leaf on the tree whistling in the wind’, my personal memory of Roger which will always stand out in my mind, will be his ‘whistling’, the ‘noise’ he made in the final stage of his life, that is the manner in which he faced his illness and accepted death and prepared for it. Roger knew that his illness was very serious, he knew that his time was going to be short, he accepted the illness and courageously and clearly was ready to go, to die; Roger made his peace with the people he needed to make peace with, he settled his affairs and made sure that everything was in order. 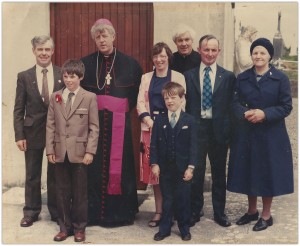 Roger was in Cabra since 1971 as assistant farm manager and he took over as manager on the death of Fr. John Costigan in 1983, and he gave 120% of himself to the farm, to its management and organization, and he loved that life. However, when the time came that he couldn’t continue he set about settling up and everything was organized and meticulously in order down to the last detail. This was Roger’s ‘leaf whistling in the wind’, his ‘swan-song’.

If I were to ask you to describe Roger in a word, we would surely come up with quite a few words, in these past days talking with people about Roger words like ‘very straight’, ‘responsible’, ‘dependable’, ‘a Trojan worker’, ‘faithful in both senses, that of a loyal man, and a man full of faith’, ‘dedicated’ and ‘committed’. I will repeat the opening line, ‘the solitary leaf on the bough of the tree will still whistle when moved by the wind’.

You all know Roger, but let me sketch some historical details of his life as a Pallottine. He was born on May 31st 1937, son of Patrick and Margaret (Peg) Campion, brother of Jim, Irene and Sheila. He had his secondary education at the Patrician Brothers College in Ballyfin. He entered the Pallottines on October 6th 1958 and did his novitiate year in Cabra. He then moved here to Thurles and did his Philosophical and Theological studies at St. Patrick’s College, across the way, from 1959 to 1965. He was ordained on June 13th 1965, together with Frs. Joe Campion, Tony Harris and the late Frs. Johnny McDonagh and Johnny Mannion. Roger went to Tanzania in East Africa with Johnny McDonagh in 1965 and lived with the late Bishop Patrick Winters in Dareda, he was very involved in building projects there. He returned to Ireland for holidays in the summer of 1969 and was then appointed to t 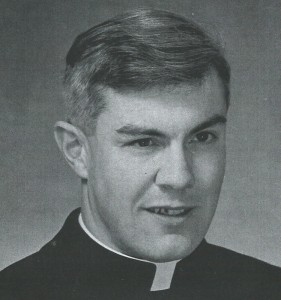 he parish of St. Mary Star of the Sea, Hastings, England. In May 1971 he was appointed assistant Farm Manager with the late Fr. Pat Whelan. He continued with the late Fr. John Costigan who was Farm Manager from 1972 to 1983, on his death in 1983 Roger took over as Manager and continued in this role to earlier this year. Roger managed the farm excellently and was a stalwart support to the Rectors of this house down through the years. As a community we are grateful to him and indebted to him for his dedication and commitment to our Province.

Roger is at peace; may he enjoy looking at God, as He is.

I first got to know Roger in 1986 when I came back from Tanzania and moved into the College in Thurles. We were very different types and it took us a while to adjust to each other. But we came to an understanding and were to spend thirteen years sharing community.

He was a very private man who did not like to be asked too many questions and didn’t allow us to see too far into his personal life – his family or his friends – though in my case Dan Regan was probably the exception. And, once I had met his nephew Rory in Tanzania, Roger would often give me an update on his progress.

Roger loved to see my own family visit and stay at the College and had a way with the children, a kindness towards them.   I remember my nephwe Dave as a little lad, maybe aged 4, sitting alone at table with Roger having breakfast. A moment of tenderness in a very strong man who himself surrendered with grace to the limitations of illness.

As far as I know Roger and I are the only Pallottines who were educated by the Patrician Brothers – he went to Ballyfin and I to the Bish! He was a great hurler.

Apart from his work on the farm he gave untold hours counting and banking the mission box money and he was always attentive to the welfare of the College, constantly keeping an eye on every aspect of its life.

In the times when he was able to, he often helped out saying Masses in surrounding parishes and people were always impressed by the way he celebrated Mass – not only because they were short but because of the quality he brought to it and the prayers that he would say.

When I go to the College now I miss the sight and sound of him. I find myself listening for the sound of him closing his car door beneath my window at night, double-checking that the front door was locked behind him, the sound of his crutches in the hallway, the lift opening and ascending.

We often sat late at night in the community room or would meet up in the kitchen for a snack before bed. And when the final illness came to him we got a glimpse into another hidden part of his life – his faith and prayer. That was truly inspiring and I feel a real sadness in his passing.

Inspiring too was the outpouring of respect and affection shown him over the days of his funeral – his own family, the eulogy, the prayers and the great number of neighbours from home who came.

Out in the cemetery in Cabra before the funeral arrived there I spoke to a grand nephew who said with true sadness “I miss uncle Roger!” And when we sang the Salve Regina after all the other prayers were finished, I spotted his youngest niece Saoirse clapping along to the sound of the music. A fitting farewell.