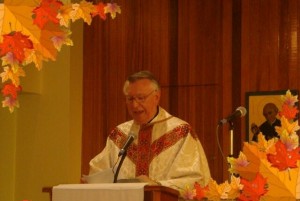 My dear brothers and sisters, today we are gathered to celebrate Fr. Bill’s life, his 85 years on earth, his 60 years of priesthood and his 65 years of Pallottine consecrated life. We celebrate his person, who and what he was to us, to the People of God and to all those he ministered to over the course of his life.

Today is the feast day of St. Thomas the Apostle, otherwise known as ‘doubting Thomas’, or as the apostle who needed to see Jesus after the Resurrection, to see him, to touch him and to place his fingers in the wounds; the apostle who needed a concrete experience of the risen and living Jesus Christ. Thomas is less well known as a great traveller, he is credited with bringing the Gospel of Jesus Christ to the Indian sub-continent in the 1st century of the life of the Church. According to an ancient Syriac document the apostles gathered after the Ascension of Jesus Christ and they cast lots to determine who would go in each direction. The document attests that Thomas went to India and spent the remainder of his life there.

Fr. Bill’s life as a Pallottine mirrored that of Thomas the Apostle in his faith experience and in that of a great traveller. Fr. Bill’s life took him from his native Askeaton where he was born on 20th November 1931 and where he received his primary education at Askeaton National School, before going to the Redemptorist College in Limerick for his secondary education.

Bill came to Thurles as a young man; he came to the novitiate in Cabra on 16th September 1949, before his eighteenth birthday. His travels to further afield started the following year, 1950, when he was sent to study Philosophy at the Pontifical Gregorian University in Rome and on completion of the three year study course he remained on for a further three years of Theological studies. While a student in Rome he made life-long friendships with other Pallottines from South America, Germany and Italy. One of his friends from those years was Fr. Joao Battista Quaini, a Brazilian Pallottine who died just six weeks before Fr. Bill. In conversation last night Fr. George Ranahan reminded us of other illustrious priests such as Cardinal Cormac Murphy O’Connor who were also fellow students with Bill at that time.

Fr. Bill had a keen mind and an aptitude for studies and so he was sent to the Catholic University of Washington after ordination to the priesthood on 30th September 1956, and there he received a Licentiate in Theology in 1958. Once again he travelled, this time further north to the University of Detroit in Michigan for an MA in history and on completion of this degree he was appointed Catholic Chaplain to Texas Tech University in Lubbock and assistant priest at St. Elizabeth’s Parish.

A change of direction took place in 1964 when Fr. Bill was elected Provincial Consultor and secretary to the Provincial and he moved to London. In 1965 he became Rector of the College here in Thurles and it was from here that he was first elected Provincial in 1969, which meant that he moved back to London. Fr. Bill’s life as a priest and in particular as Provincial brought him to many countries around the world and he was an enthusiastic traveller. Wherever he went he brought the Gospel of Jesus Christ to each place; he embodied a strong faith and a very evident joy in living. It is fitting that we are celebrating his funeral Mass today, the feast of St. Thomas the Apostle, a man of a similar strong faith.

Now I will turn to the Scripture readings for today’s Mass. The first reading, which was read for us by Fr. Bill’s niece Helen, is from the Book of Job; Job was a man of faith who lived through many difficulties and vicissitudes and yet could affirm his faith and his conviction that “I know that my Redeemer lives”, with a the stress on “I know” that God exists, Fr. Bill also affirmed his conviction and his ‘knowing’ that God lives, he may have had difficulty in articulating it, like we all do, but he had the conviction. Job goes on to state his belief that after death “in my flesh I shall see God, yes, with my eyes I will see him”; this too was the hope and the belief of Bill, to look on God and to see him after death.

The second reading today, read by Adrian, Bill’s nephew, is the reading from the Feast Day Mass of St. Thomas the Apostle and is from St. Paul’s Letter to the Ephesians. Here Paul expresses his vision and his understanding of a central truth of the Christian life: “you are not aliens, not alone, you are part of God’s household, part of God’s family”, a lovely vision of where we belong. Paul then writes of building up the People of God, and emphasizes that we are part of the building; each one has a place and a role in being built into a house which is founded on Jesus Christ the foundation, where God lives, in the Spirit. Fr. Bill shared this vision of forming God’s household – family; throughout his life as a priest he gave himself to building the Church, the place where the Spirit lives and where each person can have a place and a role. We have received many messages since Bill died, and some messages and tributes to Bill the priest, pastor and spiritual guide were sent to our Province website or posted on Facebook and they all have in common the affirmation that Bill dedicated his life to building up God’s people on earth. Fr. Bill was a very active priest, he was our Provincial for 15 years, from 1969 to 1975, when he was succeeded by Fr. Pat Dwyer, and then again from 1987 to 1996, when he in turn was succeeded by Fr. John Fitzpatrick; and as Provincial he contributed much to our life. However, as a pastor, a beloved pastor, as retreat director, as spiritual guide, he left a lasting legacy in the lives of those he ministered to, be it in Texas, in Detroit, in Nevada, Clerkenwell, Greenford or Ireland.

Fr. Bill, the man and the priest, knew pain and suffering, he faced his own limitations and his struggles. In later years his declining health and strength were particularly tough on a man who enjoyed very robust good health all through his life. The Cross, or indeed the double cross, of Parkinson’s disease and dementia were hard and cruel. He became increasingly reduced and it was sad to see that and to fathom the ‘whys’. However, in the midst of it all he was unfailingly polite, gracious, kind and educated, a gentleman in the true sense.

The Gospel reading at today’s Mass, Jesus teaching his disciples to pray with the “Our Father”, is a text I chose for a reason. Fr. Bill was a man of prayer, and we all knew his favourite prayers, Thomas Merton’s “My Lord God, I have no idea where I am going….” (which Fr. Gerry Fleming will read after Communion), John Henry Newman’s “May he support us all the day long…” (which Fr. Mike O’Dwyer will read) and St. Francis of Assisi’s “Lord, make me an instrument of thy peace …”. My last visit to Fr. Bill took place ten days ago, he had no words that day, no greeting, no conversation, and I sat with him. Finally, I said to him “Bill, I will pray with you’ and blessed myself and started the Our Father, and he joined in and prayed along with me, and when I said ‘Amen’ he continued with ‘For thine is the Kingdom and the power and the glory for ever and ever, Amen’. The prayer he had learnt as a child, from his parents, or his older siblings maybe, that prayer was there at the end. I was struck by this, that when all his faculties had failed he could still pray. A testament to a life of prayer; a legacy and a message to us too on how central prayer is to the life of the Christian and how this privileged contact with God sustains us to the end.

In summary, Fr. Bill’s life was characterized by three things; by faith, like the faith of Job, of St. Thomas the Apostle; Fr. Bill knew himself to be an apostle and he went wherever life took him with the Gospel of Jesus Christ; and he was a man of prayer, the priest.

Today we celebrate Fr. Bill’s life and we give thanks.