A focus which was to the forefront of St Vincent Pallotti’s apostolic zeal and work was ‘salvare le anime’, or ‘to save souls’. I have often reflected on this, on what he meant by it and how this vision spurred him to reach out untiringly to others. How could he affirm that “among all the divine perfections that God communicates to his creatures, the most divine is that of calling the creature to cooperate with God himself in the salvation of souls”?

An explanation of just what this might mean is that he intuited that the person is invited to commit oneself to bringing others to God, to knowledge of God, to Jesus Christ as Saviour and Lord. That commitment is realized in bringing others to know and experience the infinite love and infinite mercy of God as revealed in the person of Jesus Christ.

A gospel passage from St Luke struck me: “At sunset all those who had friends suffering from diseases of one kind or another brought them to him, and laying his hands on each he cured them.” It may have been the relaxation of the closing days of summer, or a good nights’ sleep the night before, but it was very easy for me to visualize the scene in Capharnaum at sunset; the hazy setting sun, the pleasant evening warmth, the trees, the sea in the distance, and then ‘all those who had friends suffering … brought them to him’. The impression is given of concerned, loyal FRIENDS bringing the sick and suffering to Jesus with hope in their hearts and a generosity of spirit and, because the friends did this, the sick and suffering ones have an opening to meet Jesus, and he readily responds and touches them. 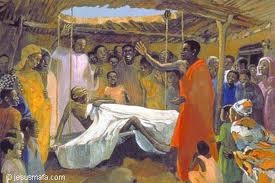 I read further on and in the following chapter once again I noted: “Then some men appeared, carrying on a bed a paralysed man whom they were trying to bring in and lay down in front of him. But as the crowd made it impossible to find a way of getting him in, they went up on to the flat roof and lowered him and his stretcher down through the tiles into the middle of the gathering, in front of Jesus. Seeing THEIR faith he said, ‘My friend, your sins are forgiven you’. And later ‘get up, and pick up your stretcher and go home’. And he did.

I came across a poem by the late Seamus Heaney, the foremost Irish poet in recent decades, in which he refers to this ‘miracle’:

Their shoulders numb,  the ache and stoop deeplocked
In their backs, the stretcher handles
Slippery with sweat. And no let up

Until he’s strapped on tight, made tiltable
and raised to the tiled roof, then lowered for healing.
Be mindful of them as they stand and wait

For the burn of the paid out ropes to cool,
Their slight lightheadedness and incredulity
To pass, those who had known him all along.

Poetry speaks differently to us all. Heaney in an interview on this poem commented:

“I realized that the guys that are hardly mentioned are central … without them no miracle would have happened.”

For me there are three strands coming together, or converging: (1) … those who had friends suffering brought them to him: (2) … some men appeared carrying on a bed a paralyzed man: (3) the Miracle, not the one who takes up his bed and walks, but the ones who have known him all along and carry him in.

Is this a way of understanding Vincent’s drive to ‘save souls’? To bring them to God, to Jesus, to a knowledge of him, to an encounter with him?  As UAC members, apostles, friends of Jesus and friends of the suffering, we ‘wear ourselves out’ in bringing others to Jesus; putting all our strength and energy into the daily tasks with our hearts and souls focused on Jesus.