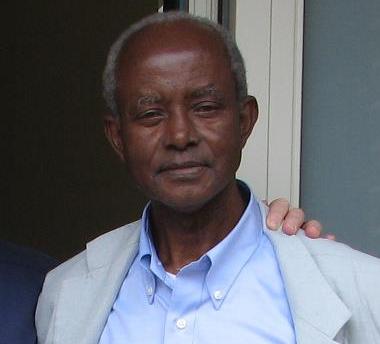 Fr. George Damball died in KCMC Hospital, Moshi, Tanzania, during the night. May his good soul rest in peace.

He was born on 5 December 1946, he made his first Pallottine Consecration on 12 September 1968 and was ordained to the priesthood on 1 July 1973. George was born at Oldonyo Sambu, Arusha and baptised at St Therese Church, Arusha on 15 December 1946. He made his First Communion in Tlawi and was confirmed in Karatu which was home to him then. He was invited to become a Pallottine by the late Fr John Costigan. He came to Ireland for Novitiate at St Marys, Cabra in 1966 and then studied Philosophy at St Patrick’s College, Thurles and also 1st year of Theology. He returned to Tanzania and did the remainder of his Theological studies at Kipalapala Seminary in Tabora.
He was appointed to Endabash after ordination; from 1975-76 he did an MA in Theology at Maryknoll Seminary, New York and from 1977 to ’79 was Spiritual Director and Professor of Spiritual Theology at Kipalapala Seminary. Following some studies in Pallottine spirituality in Rome he was appointed novice master for Tanzanian novices in Kigali, Rwanda. He later ministered in the area of formation with the students in the East African delegature both in Tanzania and later in the house of studies at Ngong Road, Nairobi, and remained a guide for many of our students throughout his life. Fr George worked at Dareda Parish, in Gallapo, Bashnet, in Magugu at two different periods, and at Sacred Heart Parish, Nairobi.
An apostolate which was very close to George’s heart was that of the AA or Alcoholics Anonymous, he officially started to collaborate with AMECEA in 1995 and he accompanied many persons who were going through the 12 Step Programme from then on, he did this wherever he was based. In 2001 the Religious Superiors Association of Tanzania requested his services to work in a team set up to run a new AA Centre in Dar-es-Salaam and he later took up this post and served as Assistant Director of a Rehabilitation Centre set up by the Capuchin Fathers in Dar and remained in this post for 2 years. From 2008 up to the final year of his life Fr George was a visiting staff member at a rehabilitation facility in the Lutheran Hospital in Haydom; he would travel there and spend a few days giving seminars in every six week cycle and often went above and beyond the call of duty in accompanying individual patients in their path to recovery. It was also his dream to set up a facility or a half-way house where recovering alcoholics could learn new skills in order to cope with life in their own communities and had plans for such a facility in Makiungu.
George was appointed assistant priest in Makiungu on 1st August 2012 and spent the remainder of his life as a priest there, he ministered faithfully to the local community and was also zealous in cooperating with personnel of Makiungu Hospital in strategies to combat the excessive use of alcohol in the local area.
George suffered set-backs in his health from the middle of 2017 onwards, it started with a blood clot in his leg and a general sense of weakness. He spent a good deal of the rest of the year in the community in Njiro with visits to Nairobi to seek medical attention. He suffered a stroke while staying at the formation house in Nairobi on March 4, he was hospitalized in the Mater Hospital, Nairobi; the stroke was diagnosed as a relatively mild one and it was expected that he would recover full strength and mobility with intensive physiotherapy. However, while in the Mater he was diagnosed with stomach cancer; initially it was hoped that he would have surgery and chemotherapy but his general condition precluded surgery. At the request of his family he was transferred to KCMC Hospital in Moshi, Tanzania, by the flying doctor service. He was administered chemotherapy but it was suspended after a few sessions as he was considered too weak to support it. He died peacefully at 21.45 on 2 May in the ICU at KCMC.
Fr George’s family requested that his funeral take place the following week in order to allow time for his nephew to travel from France for the funeral. His remains were removed from KCMC on 8 May and taken to St Vincent Pallotti Parish, Esso, Arusha, for Mass with members of his family present. From Esso he was taken to Gallapo where an all-night vigil of prayer took place. The concelebrated funeral Mass was on Wednesday 9 May, the principal celebrant was Archbishop Isaac Amani, Archbishop of Arusha, and Apostolic Administrator of Mbulu, Bishop Edward Mapunda of Singida Diocese concelebrated along with our Pallottine confreres and many other priests. Fr George was laid to rest in the Pallottine Cemetery in Gallapo. May he rest in peace.

The following is a translation of the homily preached by Archbishop Amani, kindly translated by Martin Mareja.
“1Peter 4: 7-11; Matthew 11.25-30. My dear brethren, We are gathered here to pay our final respects to Fr George Damball, RIP and to entrust his soul to God his Creator. I wish to express my deepest sympathy to the members of his family, the Pallottine leadership team and to all the members of the Society. May God grant Fr George Damball eternal rest. In order to understand events that happen in our lives we need to contextualise them in the bigger picture of our life in its totality. You might ask what I mean by that. Our Christian faith tells us that a human person passes through five phases or stages in his or her life.
Stage number one is that God wills us to be. We read in Jeremiah 1, 5, “Before I formed you in the womb I knew you; before you were born I set you apart, and I appointed you prophet to the nations”. This is the first stage of every human person, that God in his free will wants us to be.
Stage two is called conception. A child is formed in the mother’s womb. This is a very important phase in God’s plan for all human beings. Before a child is born he or she lives in the womb of the mother for nine months during which he or she is totally dependent on the mother. The mother nourishes and cares for it. That is why we must show love and respect to our parents.
Stage number three is the birth of a child. At birth a child enters into a different world from that of its mother’s womb and is introduced to a particular culture with all its traditions. It is in this stage we start to face the challenges of life; we meet different people and as we grow we begin to make choices such as a vocation to a certain life style. This is also a period of the discovery of our talents, strengths and weaknesses and with the help of God’s grace one learns to accept his or her true identity. Most of us knew Fr Damball at this stage, at a significant stage of his life.
The first reading in our liturgy today emphasise the fact that we are God’s creation and we have been endowed with talents and with the time to serve others. St Peter the Apostle reminds us that we are ambassadors of God’s talents. We must use them wisely. Fr George did the same. He used the talents which were God given for the service of others. He is a model for each one of us. The prophet Jeremiah knew and confessed that God called him to serve others. God has a plan for each one of us and it is in prayer that God reveals his plan for us.
The fourth stage is the death of a person. Just as birth brings us into this world, death takes away a human person from this world to another. Death is a mystery, it is God alone who knows when we will die. Death is a reality and we must be ready for it by leading always a good life. Fr Damball was very ill in the last few months of his life but he still trusted in the Lord’s healing hand. He hoped for a cure so that he could go back to continue with his apostolate, but the time arrived when God said “Come to me Fr Damball, you are weary and are carrying heavy burdens, and I will give you rest”. After his death he is now enjoying perfect peace with the Lord in heaven.
The fifth stage is life in heaven with the Father. Our faith teaches us that after death all persons will face the Just Judge. In the Gospel of Matthew 25:46, we read “And these will go to into eternal punishment, but the just to eternal life”. Jesus wants to convey a simple message that if we want to go to heaven then we must lead a good life. Fr George died at the age 72 years. And he was a priest for 44 years and 9 months.