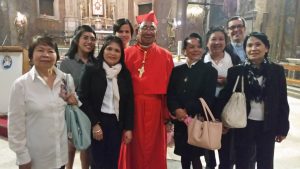 Cardinal Louis-Marie Ling Mangkhanekhoun, the Cardinal Titular of the Basilica of San Silvestro formally took possession of the Basilica on Sunday 22 of April. John Fitzpatrick, the Rector, and Rory Hanly, the vice-rector, organized the ceremony together with Msgr Vincenzo Peroni, the Papal Cerimoniere, or Master of Ceremonies. The initial part of the ceremony took place at the entrance to the basilica and then continued with concelebrated Mass at which the Cardinal was the main celebrant and homilist. In his words of welcome John spoke of the long tradition of appointing a Cardinal titular to the church, the first such appointment was made in 1517, and he remembered fondly the last Cardinal Titular, the late Cardinal Desmond Connell who died in February 2017.
Cardinal Ling is from Laos and the first Cardinal from that country in Asia. He was baptised in 1952. He entered the Institute Voluntas Dei, which was founded in Canada in 1958 by Fr Louis Marie Parent, O.M.I. It is a Secular Institute of Pontifical Right, and the first mission of the Institute was to Laos. He received his formation in Edmonton, Canada, and was ordained a priest in a hurried ceremony in a refugee camp on 5 November 1972 for the Apostolic Vicariate of Vientiane; he spent the years 1984 to 1987 in prison. He was appointed Apostolic Vicar of Pakse by Pope John Paul II in 2000, and coincidentally was ordained Bishop of 22 April 2001.

His cousin, Luc Sy, was a married catechist, and was martyred in 1970; the decree of martyrdom was issued by Pope Francis in June 2016 and he was beatified on 11 December 2017.

Martyrdom has marked the life and ministry of Cardinal Ling, he was present when two companions were martyred. 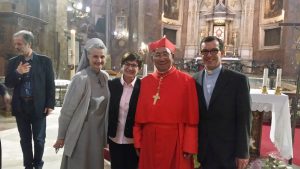 Cardinal Ling was accompanied by his secretary, Fr Lu, and by Fr Roland Jacques, OMI, who ministers in Vietnam, and Fr Thomas Klosterkamp, Postulator General of the OMI. The community at San Silvestro invited the Rector General, Fr Jacob Nampudakam, the Rector of the Irish College, Msgr Kieran O’Carroll, other priests from the communities in Rome and friends of the San Silvestro community. The members of the General Coordination Council of the Union which was meeting in Rome that week, also participated. The Mass was solemn, yet joyful, prayerful and celebratory and the Link Community choir animated the liturgy with great passion, and students from the Irish College together with Wilhelm, of the Canons Regular of St Augustine, were the acolytes and altar servers. All those present took part in refreshments in the courtyard and Cardinal Ling mixed with everybody and very willingly posed for photographs.

The Cardinal impressed everybody with his personal warmth, simplicity and openness. Congratulations to John and Rory and all at San Silvestro who did so much to make it a memorable occasion. 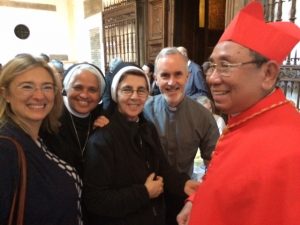