Through a glass darkly. A phrase from 1 Corinthians 13 which was the last piece of Scripture I read to John the day before he died. The same phrase came to me separately and independently from Derry and Tom yesterday so it seems an appropriate place from which to start.

In his unconsciousness John’s eyes remained open and, though he could not see us or anything around him in this world, it seemed to me that he was gazing into the Beyond, perceiving dim reflections of the reality towards which he was travelling, the God whom he loved all his life. The Father was uncovering His face to His child and like a new-born baby learning to see, John sometimes looked a bit puzzled as if he was trying to work something out, trying to understand. But the end of that gazing is this, “…we will see face to face. Now I know only in part; then I will know fully, even as I have been fully known.”

Being born to Eternal Life is a labour with its own trauma as it was with Jesus on the Cross, as it was with John. Recently I wrote about my own experience of being with Christ on the Cross, a sense of being crucified and someone commented that I was turning myself into the victim. Possibly. But this is not my intention. It has been my lifelong experience – with Christ I hang upon the Cross. I identify with His suffering and I identify with the suffering visited upon John when he was admitted to hospital to be told that he had a cancer that could not be treated. Because of the coronavirus no visitors were allowed in to him so like many others he had to deal with this shocking news alone. He was not alone because God was with him, but with him in a hidden way.

“…and suddenly the veil of the Sanctuary was torn in two from top to bottom.” (Matthew 27:5) The veil between Heaven and earth is torn to pieces and we try to patch it back together rather than allow ourselves to see into the unknown, to perceive what is being revealed to us by God. We clutch at the comforting straws of other people’s affection. There’s a hole in the bucket and straws won’t fix it, patches won’t repair the veil. There is a reality that is being offered to us if we have the courage to embrace it.
In the sanctuary of John’s body the veil was not just torn, it came crashing down around him. His was the darkness of Gethsemane, the abandonment that Jesus felt on the Cross, the silence of God the Father at Calvary. And in this darkness prayer was transformed into something more mature than he had previously known. His fidelity to God in prayer was total, utterly inspiring. He gave His all to God in a very personal way as well as in the ministry of priesthood. For the mystic approaching death, for John, the prayers, the words of this world no longer fit, no longer express the relationship he had with God. He was beyond all that most of the time in these past few weeks – a language unfamiliar to us was spoken and it was mostly silent.

These past few weeks. These past few days. One night in bed the song “I Don’t Know How To Love Him” was going round in my head as I was wondering how to love John in this phase of his life, how to love when I couldn’t be near him, to love him as was necessary in this time. I decided to look for the song on YouTube and just as I was searching he phoned me from his hospital bed on WhatsApp video, something he never did at such a late hour. Then when I got permission to visit him, one day out of the blue he started singing that very song and, when I told him how he phoned as I was searching for the song, he said, “that was not a coincidence!” Meaning that it was of God.

That was the closeness between us. We often thought the same thing at the same time, felt the same way and, while we had very different personalities, we were soul brothers whose lives ran very deeply into each other and not always smoothly but authentically. We were, as St. Gregory Nazianzen said of himself and St. Basil, “we seemed to be two bodies with a single spirit…each of us was in the other and with the other.” Sometimes that kind of closeness is too intense and difficult to sustain.

After his ordination in 1979 we were never again to live together in the same community but most summers we went somewhere together, sometimes abroad because he loved the sun and in recent years to An Cuas in the Dingle Peninsula. Very special times. Two things were central to our times away – walking and praying. On our walks we would go together a certain distance and then we would separate so that we could contemplate in silence or say the rosary privately. In the evenings we would celebrate Mass, sharing the Word and the Body and Blood of Christ, interceding for everyone.

We met in September 1972 when we both joined the Pallottines in Thurles. He was 16 and I 17 and he took an early dislike to me, thought I was cocky, stuck-up. Stuck-up maybe because of my breeding but cocky I was not. I was simply delighted to be in my new home, meeting new people. Beside myself with excitement! And he softened towards me and our friendship developed and deepened.

Our spiritual awakening happened under the guidance of Father Pat Dwyer who was our Rector and Novice Master who greatly admired the spirit that was in John, once describing him as “shot through with the Holy Spirit.” At the beginning of our Novitiate Pat brought us to the first National Charismatic Conference in Dublin where we were introduced to a new way of praying that was to transform our lives. John especially became Charismatic through and through whereas for me it marked the opening up of the Word of God in a quieter way. And from then on I felt that I was always a step behind John in spirituality and in life. He became the leader in our relationship and I the follower.

Today, the first Sunday of Lent, we have the simple and powerful statement in the Gospel of Mark 1:12 – “The Spirit drove Jesus into the wilderness.” John was driven by the Spirit all of his life. He and I were driven by the same Spirit into the Sahara Desert just over a year ago for a priest’s retreat which was to be our final journey away together. Father Thomas, the director of the retreat, spoke about this text telling us that the correct translation is the Jesus was “expulsed” into the desert, driven out. The same phrase is used for the exorcising of the devil from the life of a possessed person. It’s very, very strong. And the One who drives us out into the desert is also the Good Shepherd following behind – “surely goodness and mercy will pursue me” (Psalm 23). He doesn’t just follow behind, He pursues us relentlessly especially when we run from Him in our suffering and the pain of our sinfulness.

John walked through the desert like one driven, always up with the leading pack while I was always much further back. He was the one with the physical strength, the stamina. I was the one who struggled physically, though spiritually both of us seemed to have the strength of experience.

It strikes me now that the same Spirit drove John into another kind of desert three weeks ago when he entered St. Bart’s Hospital and I’m struck by the fact that he went there on my birthday. The experience there was as barren as the Sahara, as lonely as Gethsemane and all of us were troubled for him that he was alone and we were not allowed visit.

Then one morning his doctor phoned me as he was doing every day because I am John’s next of kin here in England. He said, “I will get permission from the Matron for you to visit Father John.” And so it was that I got in to be with him every day for the last week of his life. It was such a relief to both of us and a relief to his family that someone was with him. “You look fabulous” he said the first day. “I need to lose some weight” I replied. “Don’t bother” he said “look at me! Eat everything you can!” He had lost a lot of weight.

So we talked and cried and prayed and stayed quiet. Told each other how much we meant to each other, expressed our gratitude. I might have put in an apology for what I lacked in our friendship but there seemed to be no place for that, it seemed not to matter.
All the time I was with him I was aware of his family, felt for them – how because of covid-19 they could not travel to be with him. I kept in touch with one of his sisters throughout his time in hospital so that they could know what was going on. There are others who would have wanted to be there – his companion in the parish Father Paul, other close friends from Barking, Hastings, Ireland. One of his friends very generously said to me, “you are his mother and father, sister and brother and friend.”

The evening before he became unconscious he was already beginning to slip away so I prayed with him in the Spirit, laying my hand upon his head, singing Spirit of the Living God, singing it together and when it was finished he pulled the covers up around him, turned on his side facing me and said “you can go now!” It wasn’t a dismissal but more permission to leave and it was the last thing he said to me.

Tuesday morning he was unconscious when I arrived and looked like he would die soon so I said to the doctor that Tom Daly should also be present. The necessary permission was given and we three classmates were together for the most of two days praying, singing and being quiet. Not sleeping but watching and waiting. On Wednesday afternoon I had to return to Hastings for a funeral while Tom remained until the moment of death arrived on Thursday morning February 18th. It was good that John was not alone and appropriate that Tom should be with him. Their friendship went back as far as First Year in Secondary,

8 Replies to “THROUGH A GLASS DARKLY: In Loving Memory of Fr. John O’Brien a Soul Brother and Priest – by Eamonn Monson SAC” 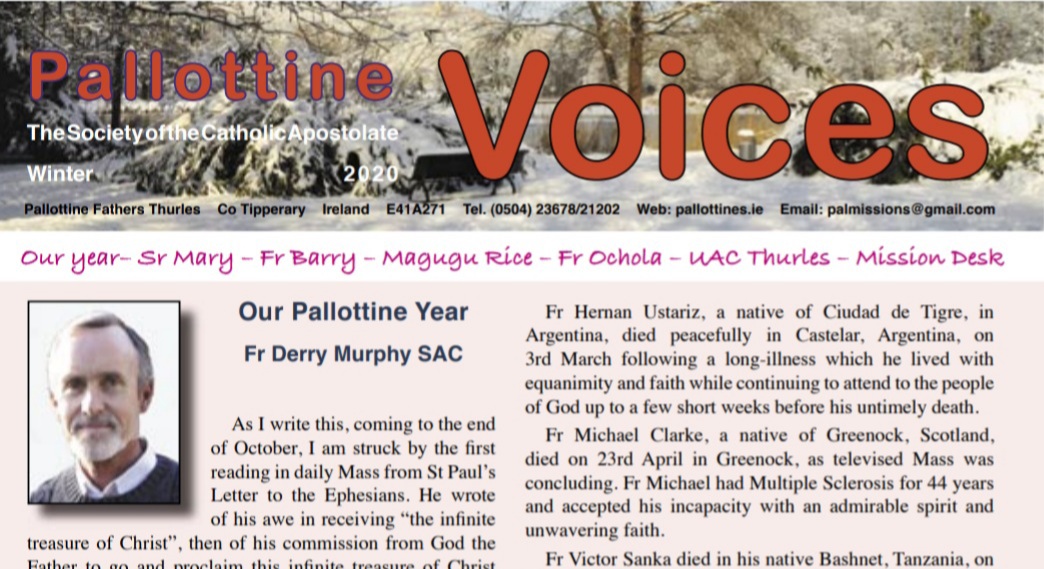